END_OF_DOCUMENT_TOKEN_TO_BE_REPLACED

It’s another beautiful Sunday, and this evening, Nsico Michaels – a Personality Deejay for KRFM, will be dishing out the latest and trending songs on the internet to listeners of LASS B PLAYLIST.

As usual, 10 Songs are on the Playlist plus 1 song on the Music Première segment. It’s going to be a groovy experience you can’t miss and that’s why I present to you the On-line Version of the Program to you below.
END_OF_DOCUMENT_TOKEN_TO_BE_REPLACED

One of Africa’s largest TV networks ‘Silverbird T.V’ is taking a step further to present to their viewers a new and exciting 1 hour music Video T.V Show that showcases the hottest , latest and evergreen Nigerian music video’s mixed together by a top Nigerian Radio DJ; The sensational Dj Smooth’  , who has given us the hottest mixes on radio via Rhythm 93.7 FM Lagos and Rhythm 94.7 FM Abuja .

END_OF_DOCUMENT_TOKEN_TO_BE_REPLACED

EVENT OF THE YEAR

On Sunday, the 19th of May, The Beespoke Center, Lekki, Lagos will host 14 Exclusive Designers as they will assemble for the Event of the Year that will feature 40 Celebrity Models alongside 10 smoking hot artistes. Its gonna be a show like never.
[Fashion + Music + Pageantry]
Date:   May 19, 2013
Venue: Beespoke Center,Lekki
Time:   4pm
Tickets: Regular 3K, VIP 10K, Table 50K
END_OF_DOCUMENT_TOKEN_TO_BE_REPLACED

It was another lovely Sunday evening with the Presenter of Lass B Playlist NsicoMichaels who was playing the hottest and popular songs to listeners of the program. He was tweeting every single action from his Twitter account and from the look of things, It was certainly a groovy episode with the likes of 2Face, ClassiQ, Sarkodie, A’J, Sammie Blacc and other smoking hot artistes on the line up. Below is the the link to the final mix down of all the songs he played. Download, Enjoy and Comment.

Incase you have been living under a rock, Iyanya’s Sophomore effort Iyanya Vs Desire [IVD]is set to hit the streets on the 11th Of February. Peep the tracklisting and features on the album below:

END_OF_DOCUMENT_TOKEN_TO_BE_REPLACED

Looks like we are about to witness another major break-up in the Nigerian music industry after the famous D’banj/Don Jazzy break up, with reports of Wizkid parting ways with E.M.E.

The story all around the music industry suggests that Wizkid has parted ways with E.M.E record label controlled by Banky W.

An insight on this was Wizkid’s absence at the Lagos Countdown Concert on New Year Eve, even though Banky W claimed Starboy was sick, as other sources reported contradicting stories of Wizkid partying in the United Kingdom.

Wizkid, who parted ways with his long time manager and friend Osagie Osarenkhoe, in September 2012, is said to be dissatisfied with his contract agreement and sharing quota within the label.

Another obvious indication of the possible music break-up is that his Twitter Bio now reads, Management @DisturbingLDN @Godwin Tom with no mention whatsoever of E.M.E Records.

Both parties have not put out a direct word regarding this matter, as Banky W squashed the break-up reports earlier this week in a recent interview, saying “Wizkid is still very much part of the E.M.E family“.

There have been reports stating that Konvict music is offering Wizkid a more lucrative offer than what E.M.E is offering, which explains why the singer decided not to drop an album again this year and opted for the mixtape instead.

The singer posted some tweets (view below) which have added more fuel to this fire of rumors.

If this report of their break up is true, then this goes a long way to explain what our music industry in Nigeria is turning into, where loyalty is continually questioned.

Moving on to start all over again!…Fuck it!.. 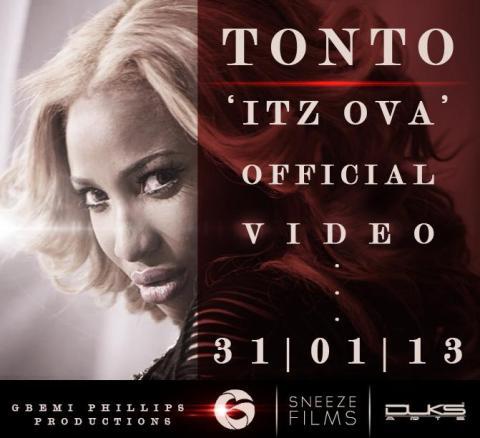 The most anticipated video of the new year is here with a big bang. Award wining actress Tonto Dikeh is out with her hot new video and this year she’s holding nothing back and taking her music career to the next level.

Tonto and her team have partnered with fast rising Producer/Director, Gbemi Philips of Gbemi Phillips Productions to bring you this extremely exciting and sexy video. The prodigious team consist of director Moses Inwang of Sneeze Films, wardrobe by Bolaji Animashaun and director of photography, Dan McCain.

This Sunday, we saw actress Kate Henshaw in a new light, as the biggest talent show hit Benin, Abuja and Calabar. “ I’m just so emotional. I didn’t give you a chance, I judged by what I saw, it’s there I am sorry” she says to twenty six years old Jude James in Benin amidst tears.

The attendance in Benin, Abuja and Calabar was massive, the talents were impressive, and for the talentless? It was an easy task to show them the door.

“I know Nigeria’s Got Talents, but this is torture” Dan Foster says to a group from Abuja: “I hated it, every bit of it” Henshaw on the other hand was quick to say to Forty Eight years old Ndanyomo Ogbonnaya: “The content you have is so bland and tasteless, even underground average, you no reach” Yibo Koko says to Peter Nweke: All over the world talents in search of the big break scramble to audition for The Got Talent series. And as a matter of fact we should be expecting more with Nigeria’s Got Talent.

The country is buzzing with enormous talent, And with Dan Foster, Yibo Koko and Kate Henshaw, the bar has been set even higher. Below are the Video Clips which you’ll enjoy watching. Drop your comments too and share this post too.

Introducing 11-year old British Nigerian Pop Princess Mya K with her latest single titled “For Now” and the exciting brand new visuals to go with it. Produced by UK-based producer Shabach and taken from Mya K’s forthcoming self-titled E.P, “For Now” is an outstanding Pop song that is sure to leave fans and critics yearning for more from the 11-year old triple threat singer, dancer and actress.

Laced with bass-heavy drum patterns and lush synths which are reminiscent of classic 80’s dance music, “For Now” sees Mya K in her elements as she excellently showcases her singing abilities and burgeoning performance prowess on the track. Visually, that performance prowess is underlined even further as Mya K shows off her dancing skills along with her already established vocal talents to make for a sassy, bubbly and excitingly enthralling performance all around…

Music Premiere: The Mixtape F.A.K.E(Flow And Kill Everything), Starring Jason Worlings as Sagas

Another highly anticipated Mix-Tape makes debut, which brings to the spotlight a rapper with lyrics that can go unavoidably unnoticed by any. Jason Worlings, better known as Sagas brings to the table ‘The Mixtape F.A.K.E – Flow And Kill Everything’,  joining the league of Nigerian/South-South hip-hop heads with word play power. It features other young talented acts like Super Star Producer, Song Writer and Soloist – Otyno. The album also features other hot rappers like Foxx, Leki, and MaliQ (Ibibio Lyrical Maestro). Song birds like Psimfoni and Chris Brown are not left out on this album too.
Download and Enjoy the Mix-Tape Album either the Full Album or One Track after the Other.

The twenty [25] year’s celebration of uncommon transformation of Akwa-Ibom State had plenty of activities but one event that made the jubilee celebration, the centre point of class and excitement was Monty Fun Festival, which will be long lasting in the memory of people of the ‘the land of promise’.

END_OF_DOCUMENT_TOKEN_TO_BE_REPLACED

Spinosky, real name Ubong Ukutt, is a Native of Obot Akara in Akwa Ibom State, second boy of two sons, born in Chicago, Illinois, USA over 20 years ago. Currently a Radio presenter with Atlantic 104.5 FM (Jolly Jolly), also a TV Presenter, an MC, Radio DeeJay, Comedian, an Events consultant who has anchored and presented in national Events like Star Carnival 2011, Nite of A Thousand Laughs 2009 and Calabar Carnival 2009 amongst others, the Winner: Comedian of the Year 2010 Uyo City Awards and Award recipient of Newstrend Award for Resourcefulness in Entertainment (2011).
Off IN-SANITY Vol 1, a 70 minute Audio Comedy expose on Mess (Fart) and its Benefits with Musical Interludes from indigenous Stars, Spinosky premiers 2 Single MESS IN CHURCH + MESS & MUSICIANS Produced by Mr. Dehniece for Audio Factory Nigeria simultaneously . ‘Mess and Its Benefits’ A first of many Volumes is solely his creativity for d brand SPINOSKY. From now you shall mess with pride…

END_OF_DOCUMENT_TOKEN_TO_BE_REPLACED

In this all-new episode of Gidiculture TV – its third of the season – we catch up with award-winning Nigerian DJ, DJ Xclusive who is also Wizkid’s official DJ, part of the E.M.E family – with Banky W, Skales, Shaydee and Niyola – and in-house radio DJ at the renowned 96.9 Kool F.M radio station. Xclusive gives Gidiculture TV the scoop on what it is like working with Wizkid and the entire E.M.E crew to how DJ Xclusive has become such a household name and so much more…

END_OF_DOCUMENT_TOKEN_TO_BE_REPLACED

Voice Of The Woman

Error: Twitter did not respond. Please wait a few minutes and refresh this page.